Hari Krishna Garg 1 & Ashish Shrivastava
Cytological investigation was carried out on Himalayan green pigeon, Treron phoenicoptera (Latham). The bone-marrow extract of twenty two male and eighteen female individuals yielded four hundred mitotic metaphase plates for cellular investigation. The diploid count varied from 72 to 80 with a prominent peak at 74 shown by 43.04% of the cells scored. Among the forty individuals examined, nine divergent karyotypes irrespective of sex were encountered. In natural populations of the bird, it appears that polymorphism existed due to two independent pericentric inversions - one in the largest pair of autosomes hereafter, designated as I and another in the fifth autosomal pair (second largest pair of the genome), alluded to as II. 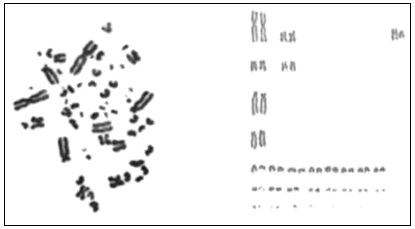