Selçuk Altınsaçlı*, Songül Altınsaçlı , Ferda Perçin Paçal
This study was performed in a typical cirque Lake Kartal (1903m a.s.l.) located on Mount Sandıras (Çiçekbaba). Spatial and temporal distribution, abundance and habitat preferences of ostracod assemblages were studied in of Lake Kartal in Turkey. Two ostracod taxa (Candona neglecta and Psychrodromus olivaceus) were identified from Lake Kartal during May 2008 to October 2008. Among all ostracod species, the most common and abundant in Lake Kartal was Candona neglecta (56%, 912 individuals). During this study, other microcrustacean fauna were qualitatively evaluated. Some main physico-chemical parameters were also analyzed. Kartal lake is a freshwater (salinity between 0.0-0.1‰) alkaline (pH between 8.25-8.94) and shallow (2 m) lake. According to Spearman correlation analysis, there was significant relationship between ostracod species and temparature in Lake Kartal. There are a significant relationship between number of ostracod species and altitude in Lake Kartal and also other adjacent lakes. 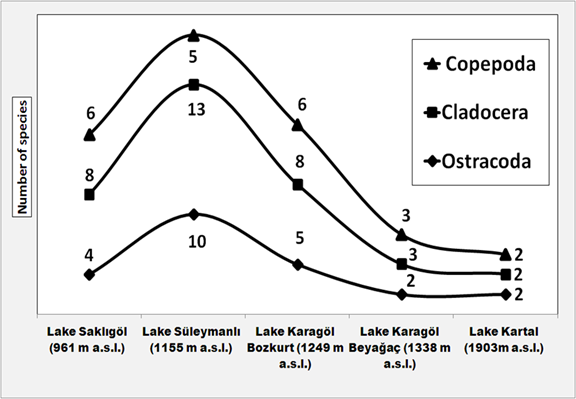