S. Yerzhanova, G. Meyrman, A. Abugalieva, B. Bashabaeva, A. Abekova, R. Massonichiсh - Shotunova, S. Abayev
Vetch (Vicia sp.) One of the most important crop of the world. In Kazakhstan is a traditional and major source of legume fodders. In this work, we studied the regeneration ability of genotypes of vetch explants on media with the different concentrations of cytokinin and auxin for activation of axillary buds and obtaining regenerants. Optimized 12 culture media to culture Vetch (Vicia sp.) in vitro genotypes. The frequency of shoot regeneration, depending on concentration of cytokinin and auxin, was 1.0 - 10.8%. On these explants were observed multiple shoot formation. 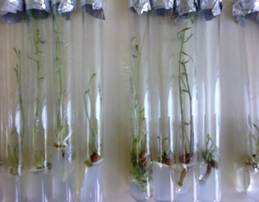