Kabirul Bashar, Md Selim Reza, Mohammad Abdur Razzak, Khondoker Md. Zulfiker Rahman, Partho Goda and Abdul Jabber Howlader
A study was conducted to investigate the species diversity of Odonata (dragonfly and damselfly) in five selected areas of Bangladesh viz. Dhaka, Moulvibazar, Bandarban, Chuadanga and Khulna during July’ 2009 to June’ 2010. A total of 3350 individuals belonging to 48 species under 8 families were observed during the study period. Among them 25 species were dragonflies under the families; Libellulidae (22), Aeshnidae (2) and Gomphidae (1), whereas the remaining 23 species were damselflies under five families; Coenagrionidae (16), Platycnemididae (4), Calopterygidae (1), Lestidae (1), Protoneuridae (1). The highest and lowest number of species was observed in Dhaka (31) and Bandarban (23), respectively. Libellulidae was the dominant family whereas few species were found under the family Gomphidae, Lestidae, Calopterygidae and Protoneuridae. Species composition was highest in the family Libellulidae (45.8%) followed by the family Coenagrionidae (33.3%). Post-monsoon represented by 45 species was the optimum season for Odonata. The present surveillance yielded one new species of Dragonfly, Gynacantha dravida and five Damselfly species: Aciagrion pallidum, Ceriagrion praetermissum, Lestes elatus, Copera chantaburii and Copera ciliata in the perspective of Bangladesh. The above results indicate that study of Odonate species in other regions of the country would provide insight in updating the checklist of Odonate species in the country, and know their ecology, and their relative importance for the successful conservation strategy and impact of climate change on this group of insects. 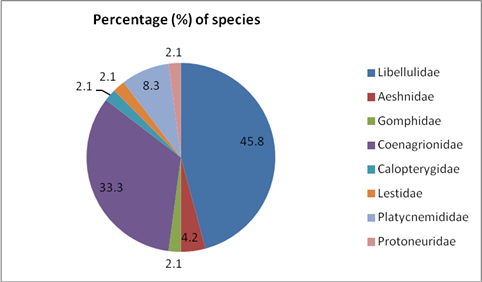