Seasonal changes in the architecture of hepatocytes in relation to ovarian activities during growth, maturation, spawning and post-spawning phases in Mystus vittatus (Bloch, 1790)

Padmanabha Chakrabarti, Nilanjana Chatterjee
The present investigation dealt with the observations made on the histological architecture of hepatocytes and correlated them with the seasonal changes of ovarian activities in Mystus vittatus (Bloch, 1790). Histologically, each hepatocyte of female M. vittatus was provided with distinct nucleus and granular basophilic cytoplasm. Various female germ line cells were also recognized on the basis of size and histoarchitecture of the cells. However, on the basis of relative abundance and size of the different oocytes the event of oogenesis has been found to occur in four distinct phases, growth, maturation, spawning and post-spawning. It was found that during growth and maturation phases the amount of cytoplasmic granules of hepatocytes was increased as well as the nuclei became hypertrophied. During spawning phase the cytoplasmic granules were sparse in the hypertrophied hepatocytes. However, no significant alterations were noticed in the hepatocytes during post-spawning phase. Cytological variations in the hepatic cells were correlated with the different reproductive phases in female M. vittatus. 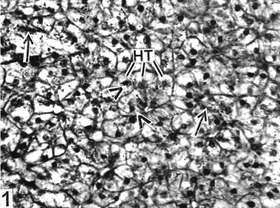