C. R. Choudhari, Y.K. Dumbare and S.V. Theurkar
The different vegetation type was used to identify the oligarchy among millipede species and establish that millipedes in different vegetation types are dominated by limited set of species. In the present research elucidates the diversity of millipede rich in part of Northern Western Ghats of Rajgurunagar (MS), India. A total four millipedes, Harpaphe haydeniana, Narceus americanus, Oxidus gracilis, Trigoniulus corallines taxa belonging to order Polydesmida and Spirobolida; 4 families belongs to Xystodesmidae, Spirobolidae, Paradoxosomatidae and Trigoniulidae and also of 4 genera were recorded from the tropical or agricultural landscape of Northern Western Ghats. There was Harpaphe haydeniana correlated to the each species of millipede which were found in Northern Western Ghats region of Rajgurunagar. At the time of diversity study, Trigoniulus corallines were observed more than other millipede species, which supports the environmental determinism condition. Narceus americanus was single time occurred in the agricultural vegetation landscape due to the geographical location and habitat differences. 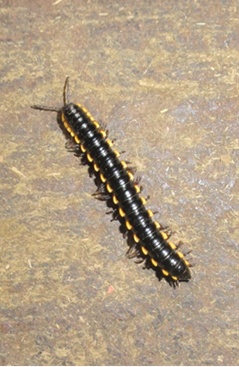