Atanu Bora, L. R. Meitei, Mitrajit Deb
The present paper deals with the study of species richness and diversity of butterfly fauna in the Experimental Botanic Garden of Botanical Survey of India (BSI), ERC, Umiam, Meghalaya, India. The study was conducted from June 2013 to May 2014 in the experimental garden. The population trends of butterflies were monitored for one year using transects counting method. A total of 66 species of butterflies belonging to five families and 47 genera were recorded during the study period. The family Nymphalidae showed the maximum species richness, comprising of 15 genera and 23 species, followed by Lycaenidae (14 genera, 14 species), Pieridae (8 genera, 12 species), Hesperiidae (8 genera, 9 species) and Papilionidae (2 genera, 8 species). A total of 1164 individuals were recorded of which Eurema hecabe (Linn.) was the most dominant species of butterfly in terms of number of individuals (38) followed by Junonia atlites (36). From the conservation point of view, the study area is undisturbed and rich in butterfly fauna. 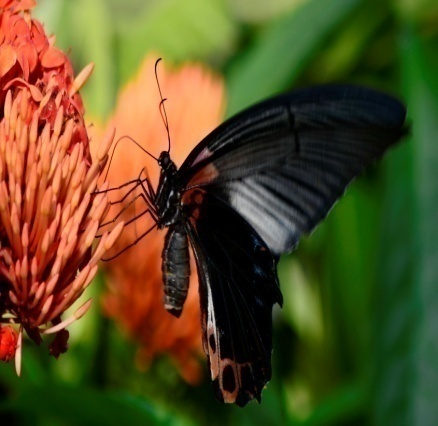